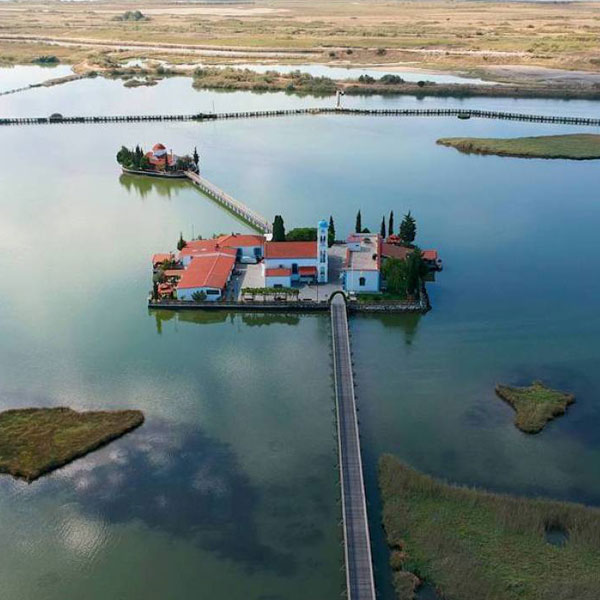 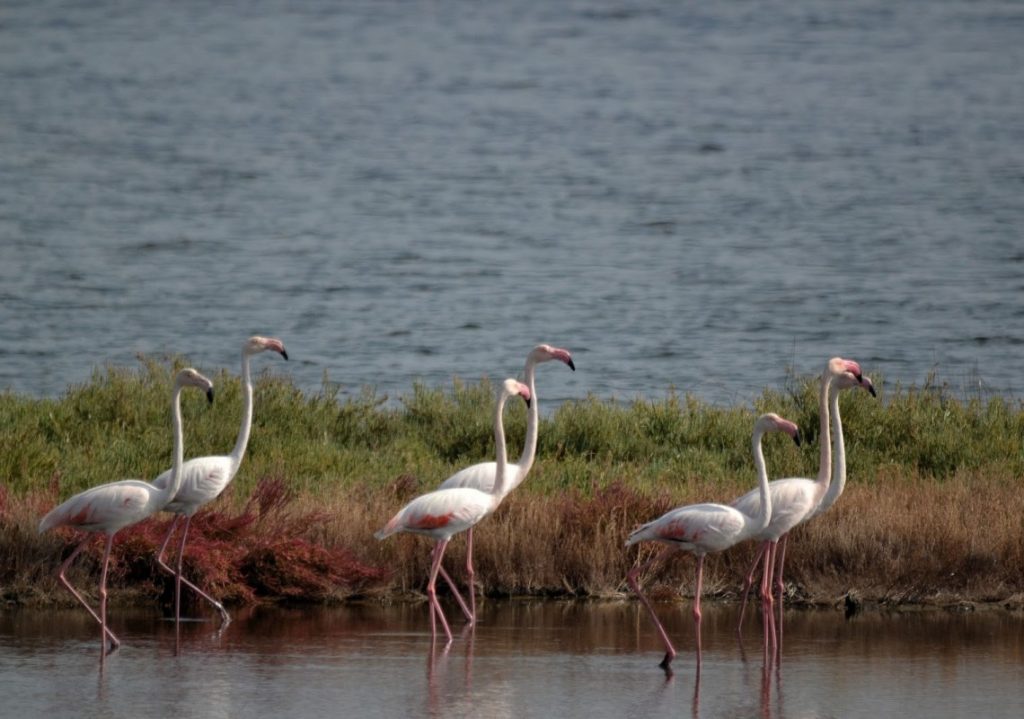 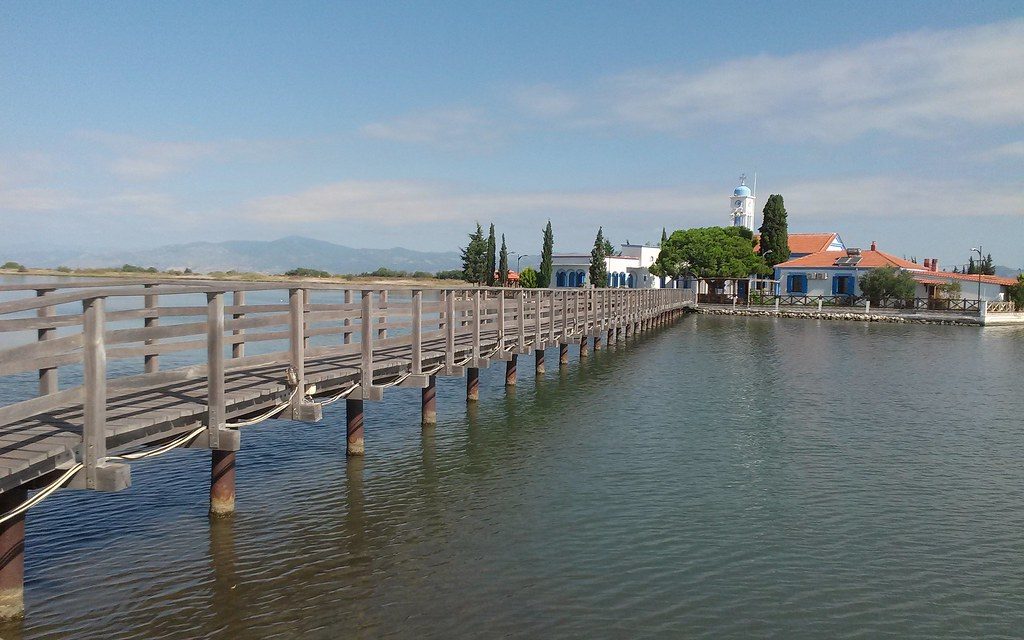 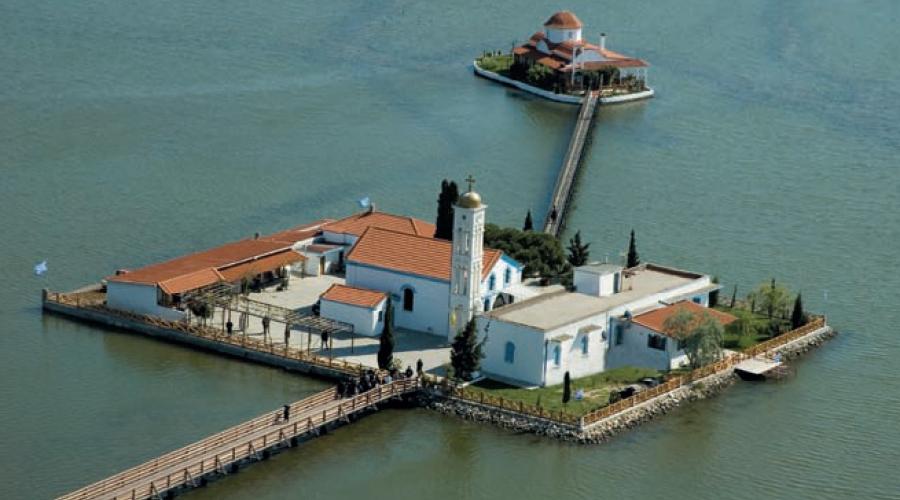 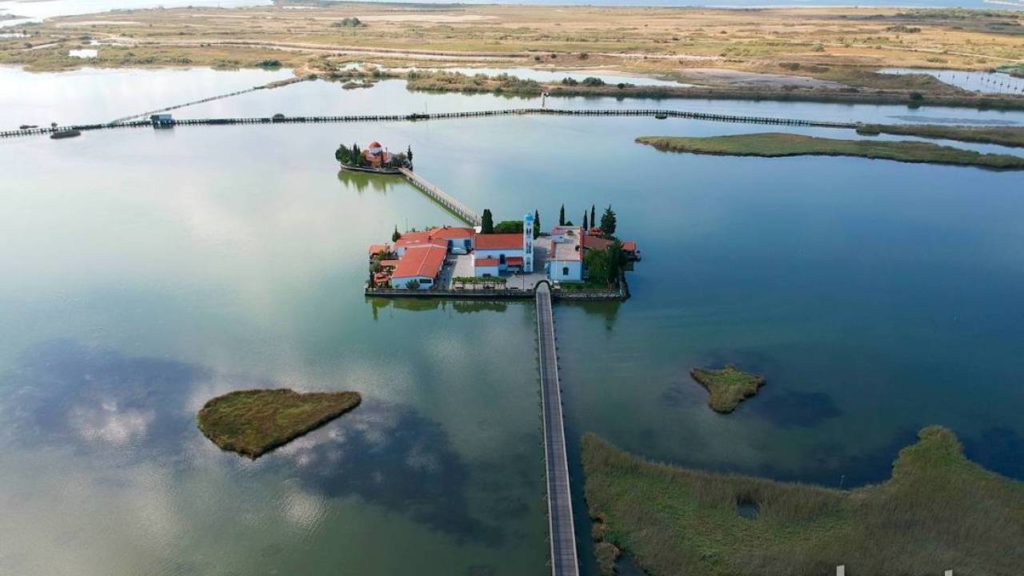 Departure Time from Thessaloniki to Porto Lagos & Lake Vistonida at 09:00
Returns to original Pick up point at 19:00 (approx.)

A dreamy lake in Northern Greece
In the middle of a large and fertile plain marking the boundary between the regions of Rhodope and Xanthi, lies Lake Vistonida, one of the most beautiful wetlands in Greece. It is the fourth largest lake in the country, covering an area of 45 km2, a dreamy location where the green hues of the forests meet the azure of the sea.

The lake is situated in the middle of a group of wetlands which cover the area from the Nestos River Delta up to and including Lake Ismarida (Mitrikou). Within a short distance lie the lagoons Lafri, Lafrouda and Porto Lagos in Xanthi District, as well as the lagoons Daliani, Xirolimni, Karatza, Alyki, Ptelea and Elos in Rhodope. The above wetlands constitute the National Park of Eastern Macedonia and Thrace as they are very important water reserves. The lake is located 25 km SE of Xanthi, 23 km SW of Komotini and 225 km E of Thessaloniki.

What we can see in Porto Lagos & Lake Vistonida

How the myth goes about Vistonida
Vistonida was named after the Vistones, a Thracian tribe who once dwelt in the area. Their legendary king Diomedes was famous for his man-eating horses. The beasts were captured by Hercules who took them to Mycenae, following the order of king Eurystheas. Out of Hercules’ Twelve Labours, this was feat number eight!

A unique wetland
Lake Vistonida is separated from the sea by a narrow strait created from silt depositions and is connected to it through canals. On the east there is a natural canal with two mouths on the lake, which connects it with the sea via Porto Lagos lagoon; on the west, there is an artificial canal built during the 1950s, which allows direct access to the sea. The result of the above connections is a phenomenon occurring nowhere else in the country: the north part of the lake contains fresh water as a result of the rivers flowing in, whereas the south part contains saline or brackish water depending on the volume of seawater entering the lake.

About its formation
It was created approximately five million years ago, as a result of an abrupt subsidence of the land allowing seawaters to fill in the present lake area, through the wearing action of tidal currents which eventually formed a closed lagoon. At the same time, adverse currents led to the creation of the isthmus which separates the sea from the lake.

Life in the lake
There are over 300 species and subspecies living in the area. These form the basis of plant and animal life in the lake which offers accommodation, protection and food to many more. Along the lakeshore and in the shallow parts of the lake, reeds form a wall that is impenetrable and therefore provides the ideal shelter for nesting to many bird and fish species. In river mouth areas there are willow and aspen trees, manna ash, elm, alder and plane trees. Their trunks are covered by climbers such as hops, viburnums and clematis. There are also single trees and bushes lying scattered around the lake, such as oak trees, vitex, elms, kermes oak etc.

Lake residents
The species that live in or visit the wetland are many and rare. The local fish community counts 37 species, 21 of which live in the lake and 16 come from the sea. The common carp, the common rudd, and the alosa vistonica are to be found in the fresh water area, whereas the eel, the european seabass, the flathead mullet, the gilt-head bream, the sole, the sand steenbras, among other species, are to found in the saline water area. There are also 20 mammal, 19 reptile and 11 amphibian species enriching the biodiversity of the local fauna. The European otter finds shelter in the lake’s waters and the river currents. The shrub growths by the lakeshore and by the Kosynthos and Kompsatos river deltas are the preferred habitat for the wild cat, the badger, the jackal and other animals.

Bird flights
The flying bird populations you will meet in the area are impressive with regard to their numbers as well as to diversity of species. Out of 260 recorded species, nine are rare or endangered in a worldwide scale.

Bird watching by Lake Vistonida
Waterfowl over the dreamy lake of North Greece
In the middle of a large and fertile plain marking the boundary between the regions of Rodope and Xanthi lies Lake Vistonida, one of the most beautiful wetlands in Europe. It is the fourth largest lake in the country, covering an area of 45 km2, a dreamy location where the green hues of the forests meet the azure of the sea. The wetland is a birds’ paradise for populations of the entire European continent, as 260 species of birds have been observed here. The list grows longer every year with observations of new species. These birds of passage visit the wetland and Greece as they traverse from other continents (America, Asia). So, carry with you a pair of binoculars, a high definition zoom camera, follow your guide and you’re off for a unique bird watching experience!

Amazing bird sights
The bird populations you will meet in the area are impressive in terms of their numbers as well as of the great variety of species. Out of 260 recorded species, 9 are rare or classified as endangered throughout the world. Among these are the red-breasted goose, the ferruginous duck, and eagles such as the White-tailed eagle, the greater spotted eagle, and the lesser kestrel. This place is the habitat for some of these birds. Other species come either from the north in order to spend the winter in milder climates and find food, or in the spring in order to nest and reproduce and return in the south in autumn.

Out of the ordinary birds!
One of the main reasons for you to visit Lake Vistonida would be to spot the white headed duck, one of the world’s rarest bird species, as their population is limited to 13,000 individuals across the planet. The white headed duck (Oxyura leucocephala) comes from the lagoons of Kazakhstan to winter in Vistonida, in late October or early November and remains in the area until late February or early March. Two other must-sees are the pink-feathered flamingoes flapping their wings and revealing the reddish hues of their feathers, and the mixed colony of Herons in the Porto Lagos small wooded area.

Touring the area
Apart from bird watching, you can also visit the Avdira archaeological site and the nearby Archaeological Museum, as well as the monasteries of Panagia I Archangeliotissa and of Panagia I Kalamou. You can drive on and off road, ride a bicycle along the lakeside area or canoe along the lake; this will no doubt turn out to be an experience to remember.
Make a point of visiting the enchanting old Xanthi town, the jewel of Thrace, and discover the area’s rich historical and cultural tradition which flourished mostly during the 19th century, as the area became famous for producing and processing tobacco.

Thracian flavours
After hours of bird watching you will eventually feel hungry! Try the local dishes; they will definitely live up to your expectations! The region’s gastronomy combines traditional old Thracian dishes with much affinity to recipes from Asia Minor (Anatolia) as well as to the local Pomak community. Try sausage, pastirma (or pastrami), kavourmas, tzigerosarmades, gioufkades, chylopites, pork or chicken with pickled cabbage, chicken with couscous, sweet or savoury pies, stuffed cabbage leaves and kebab. On the seaside areas, there’s lots of fresh seafood. The fish tavernas in Fanari village and Porto Lagos and the traditional tavernas in old Xanthi town will introduce you to the magic of the Thracian cuisine! Xanthi is also known for the top quality sweets and desserts. In pastry shops down town or in the Old Town alleys you can try the famous syrupy baked pastries or you can treat yourself to sweet delicacies rolled in chocolate and nuts.

Another fine idea would be to visit the Women Tourism Association of Stavroupoli and the Shop selling local traditional products of the Nestos Valley in Stavroupoli. Buy some home made spoon sweets and jams, local pasta, forest berries, fine embroidery and well-known wines produced in local wineries.

Service Type
Thessaloniki to Porto Lagos & Lake Vistonida - Private Day Trip
Provider Name
Hello Thessaloniki,
Thessaloniki, Telephone No.+306907798620
Area
Lake Vistonida
Description
A dreamy lake in Northern Greece. In the middle of a large and fertile plain marking the boundary between the regions of Rhodope and Xanthi, lies Lake Vistonida, one of the most beautiful wetlands in Greece.