Visit the Cave of Saint George, Kilkis
Saint George’s Cave is located at the foot of Saint George’s Hill of Kilkis and is ranked among the most appreciated in Greece. Its surface is relatively large and exceeds 1,000 square meters and has two floors. Its humidity remains constant at 95% and its temperature does not exceed 15 to 17 degrees Celsius. It consists of limestone rocks and dates back 235 million years ago. The creation of the cave began when the rain water managed to pass through the rocks by releasing carbon dioxide, resulting in the erosion of the rock by its acidic action. So with the rain water calcite is installed in the cave, which is the basic material of the cave formations. The cave was discovered around 1925 by the cemetery Georgios Pavlidis (Boulasikis) who worked and accidentally found himself in front of the entrance of the cave. The first mapping was made by Anna Petrochello in 1930, and much later in 1986, the cave became accessible after suitable excavation works that began in 1977. It is of particular cave importance, as there is no air stream where they are unique in their kind of stone coral, stalactite and stalagmite decoration on the walls, ceilings and floors due to the shaking and scattering of drops of water falling into the ground. Thus, among other things, there are several interesting forms called “Rhino”, “Snake”, “Kalogeros”, “Flamingo”. Additionally, the visitor chambers are six and are particularly spacious.

After scientific researches made by Czech scientists at the cave of Kilkis it was discovered that its vine can cure diseases such as childhood asthma and dermatological diseases originating from infections and allergies. In fact, the cave has begun to establish a guesthouse for patient hospitalization and conduct of treatment.

Skra Waterfalls and Blue Lagoon
This pearl of northern Greece is formed by dozens of streams of Mount Paikos that run together, ending at the waterfalls of Skra.
The lake is formed by streams of Mount Paikos, which run together and end at the waterfalls of Skra (they took their name from the village Skra, located in the north), with the characteristic stalactites and stalagmites and the crystal clear waters, then falling to the point this creating the lake, the depth of which reaches 4 meters. The blue lake owes its color thanks to the fossilized rocks that are at its bottom.

Guests can enjoy a variety of activities and walks in nature, relaxing on one of the benches and enjoying the stunning scenery, dense forest with tall trees, plane trees, oaks, pines and indefinitely fragrant trees that let the sun reach only in some parts of the lake, intensifying the cinematic effect of spectacle – it is like watching scenes from “The Lord of the Rings”, in the most serene.

We will leave the car in the open parking and follow the stone path and the approximately 300 wide steps that lead to a green glade next to the stream of Kotza-Dere, where there are wooden tables and seats to rest.

Next, we will cross the wooden bridge over the rushing waters of the forest. There we will choose one of the two paths that will bring us in front of a natural spectacle, the small and large waterfalls. Close your eyes for a while and indulge in the magic of sound from the foamy waters.

But the surprises do not stop here!
We continue on the dirt road and very soon we will find ourselves in front of Lake Skra. A landscape of eerie, paradisiacal beauty, in the dense forest, which may be inhabited by fairies, when darkness falls.
Its incomparable beauty awe-inspiring every visitor and makes necessary the refreshing and dip, which if you are bold you can do it from the knotted rope hanging from a tree. 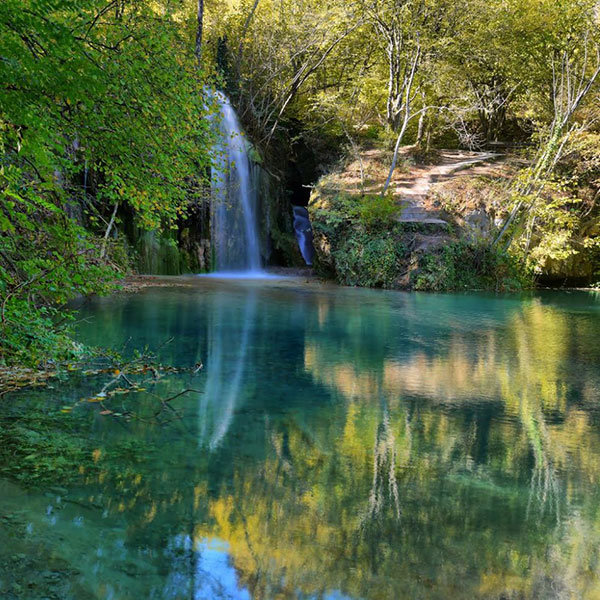 Service Type
Thessaloniki to Skra Waterfalls and Blue Lagoon - Private Day Trip
Provider Name
Hello Thessaloniki,
Karolou Ntil 31-33,Thessaloniki,Greece-54624,
Telephone No.+306907798620
Area
Skra Waterfalls
Description
This pearl of northern Greece is formed by dozens of streams of Mount Paikos that run together, ending at the waterfalls of Skra with the characteristic stalactites and stalagmites and the crystal clear waters fall to the point this creating the lake, the depth of which reaches four meters.