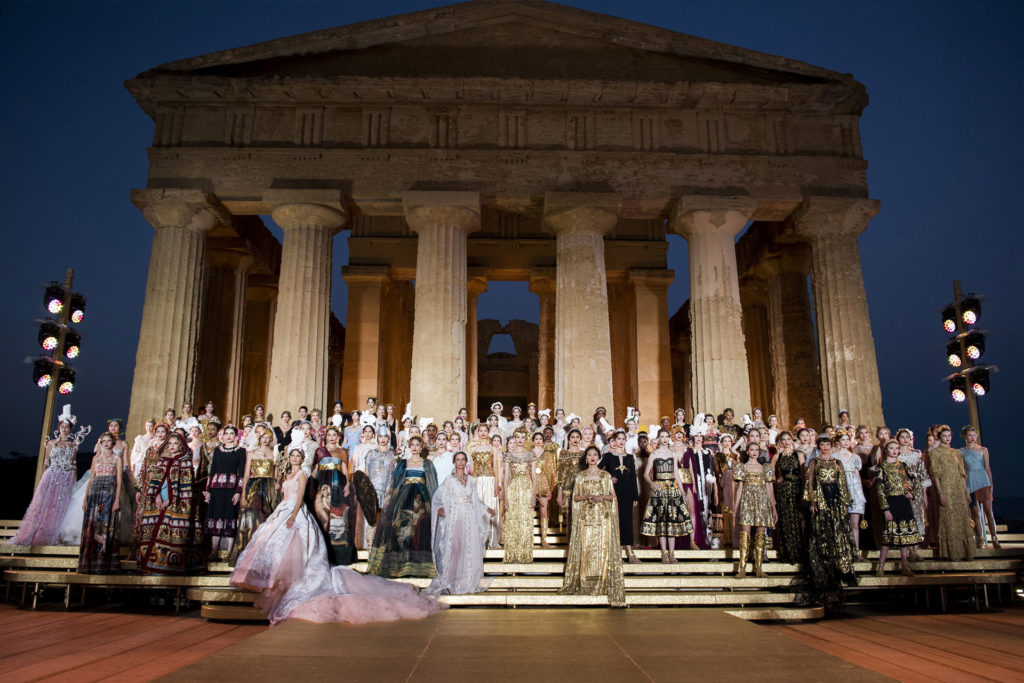 The Temple of Omonia, in the Valley of the Temples of Agrigento, has been selected as the scene for the Alta Moda 2019 of the Italian house Dolce & Gabbana that took place on July 5, 2019.

The new fashion show inspired and based on ancient Greek culture – ancient Greek and Roman goddesses. Dolce & Gabbana managed to make a difference once again.

Helena Christensen was wearing a translucent black tulle ball gown scrolled with golden embroidery out of ​The Leopard​. The top model commented about the show. “I thought of all the powerful women who had walked here thousands of years ago”.

The archaeological site of a total area of ​​twelve kilometers, extending to the south of Agrigento, the music of Ennio Morricone and the sunset added to the blend of the Greek and Italian culture.

The negotiations to present the Alta Moda collection in Sicily’s home of Dolce & Gabbana lasted for two years.

Preparations to make this reality show were extremely complicated. A wooden rig had to be built and installed on a sand bed so that the structure of the archaeological site could not be touched in any way, and the models could be catching up on it.

Does anyone remember the Gucci House’s proposal for the Acropolis?

“The particular cultural character of the Acropolis monuments is incompatible with this event as they are unique monuments and symbols of world heritage, UNESCO World Heritage Sites”: With this justification, the Central Archaeological Council members unanimously rejected Gucci’s request for fashion show within the archaeological site of the Holy Rock.

The specificcompany requested permission to carry out a fashion show of the Gucci Cruz 2018, in the space between the Parthenon and the Erechtheion (or east of the Erechtheion) on 1 June 2017.