Departure Time from Thessaloniki to Pelion at 09:00
Returns to original Pick up point at 19:00 (approx.)

When you mention Pelion, Mount Pelion is the first destination that comes to mind.

The mountain has relatively low levels of wilderness and elevation. Its highest summit, Stavros, is 1.624 metres, stretching for approximately 50 Km. Mount Pelion forms a natural borderline between the district of Magnesia and the Aegean Sea.

Its soft slopes and easily accessed peaks make Mount Pelion a popular destination for hiking lovers and weekend mountain climbers. Two mountain shelters, the one at Agriolefkes and the other at Agios Georgios of Zagora host weary climbers and hikers. In Agriolefkes, near Hania, there is also a skiing resort for skiing lovers, whereas an abundance of mountain routes and trails are ideal for mountain biking and horseback riding.

One gains an exhilarating experience all year round when visiting Mount Pelion or its traditional villages, whether it’s in mid-winter when everything is covered in snow, or in spring or summer when colourful wild flowers cover its slopes, which are full of fir, chestnut, oak and beech trees.

What we can see in Pelion

Cosmopolitan Portaria
Portaria is one of the most cosmopolitan villages of Pelion, bustling with life since it hosts visitors throughout the year. Situated at the foot of Mount Pelion, it’s the first village one gets to from Volos. Its popularity as a travel destination and its accompanying cosmopolitanism spring from its vicinity both to a skiing resort and also to the sea. Luxurious hotels, traditional hostels, rooms to let, restaurants and tavernas, coffee shops, bars, and shops selling souvenirs and traditional folk art items meet all visitors’ tastes and needs.

Cultural Zagora
Zagora is situated on the eastern slopes of Mount Pelion, with a great view to the Aegean. A densely-populated village, Zagora consists of four districts, all meeting around the central square of Ag. Georgios, having taken its name after the adjacent small church, famous for its excellent altarpiece. This very square also hosts, since the end of 18th century, the famous Public Library, which nowadays operates as a lending library with many and great, rare books, while there is also a reading room within its premises.

At a short distance visit Drakopoulou Mansion, which houses on its ground-floor, the food preparation facilities of the Women’s Agrotourism Cooperative of Zagora. This is where nature meets tradition, since the thriving orchards of the surrounding area offers abundant citrus-trees, essential ingredient of many delicacies, such as spoon sweets, home-made marmalades and liqueurs, the recipes of which have been handed down from older generations. Treat yourself one of these delicacies after a hard going hiking so to get some of your strength back or get some to treat your beloved ones back home.

Elegant Tsagkarada
Tsagkarada lies 500m above sea level on the eastern side of Mt. Pelion, along a densely wooded area, looking out to the Aegean. Here, nature is dominant with chestnut and plane trees, being twisted around every single old and new construction of the sparsely-populated village. Treat yourself a cup of coffee at the central square of Agia Paraskevi, where the great Plane Tree counts a life of at least ten centuries. One of the things a visitor should see exiting the village is the arch bridge constructed by builders from Epirus. Some historic sites of special interest are also the Achillopouleios Commercial School and the Nanopouleios School. Before departing don’t forget to gather mushrooms as well as chestnuts or join the Chestnut Festival held in November, if you happen to be around.

Strolling Vyzitsa
Famous Vyzitsa, a village of Pelion enjoying major tourist development since the 80s, is typical of its Pelian scenery, its stone-paved alleys, its renovated lordly mansions (archontika), its lush greenery and its stone fountains. Climb up its central cobblestones alley heading for the central square. Walk around the picturesque neighbourhood of Argyraiika and if weather permits go hiking to Milies or to the coastal village of Kala Nera. The scenery is breathtaking… Visit also Esperides, the Women’s Agrotourism Cooperative of Vyzitsa, very popular within and without Vyzitsa’s borders for its catering services, and taste its traditional products ranging from marmalades to home-made pastas.

Milies
Milies is the starting point of the legendary steam train of Pelion, the so-called “Moutzouris” (i.e. smudgy) extending up to Ano Lechonia. Its rail track runs along a route of natural beauty connecting the centre of Volos to the fertile district of Western Pelion. In Winter , when the train stops operating, walk along its rail track and take pictures of the iron bridge constructed by Evaristo de Chirico, the chief engineer and mastermind of the Pelian steam train and father of the surrealist painter Giorgio de Chirico. Take the path heading towards Vyzitsa and enjoy the panoramic view of the Pagasetic Gulf. It is also worth paying a visit to the Church of “Pamegiston Taxiarchon”, typical of the Pelian architecture with post-Byzantine icons of artistic and historical significance.

Makrinitsa, the balcony of Mt. Pelion
Makrinitsa known for offering one of the best panoramic views to Volos and the Pagasetic Gulf has retained the traditional Pelian architecture and construction. So one can admire its renovated lordly mansions, its romantic stone paved alleys, its elaborate fountains, its super centenarian plane trees and its lovely flowers, which all make Makrinitsa one of the most breathtaking destinations of Pelion. There are also interesting art cafes and galleries revealing the artistic interests of its local people.

Pinakates, a village out of a fairytale
Pinakates, a village almost untouched by men, on the southern slopes of Pelion, pictures like a little secret hidden in the Mountain of Centaurs. People hardly knew of this place up until 1999, when a road from Vyzitsa to Pinakates was constructed to give access to this wonderful village. Its majestic nature, its serenity, its small central square sheltered under a big plane tree combined with its authentic scenery lure every visitor. 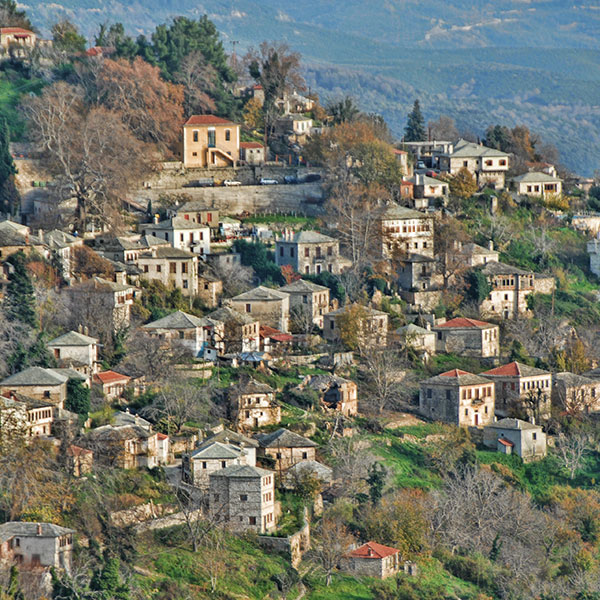 Service Type
Thessaloniki to Pelion - Private Day Trip
Provider Name
Hello Thessaloniki,
Thessaloniki, Telephone No.+306907798620
Area
Volos
Description
When you mention Pelion, Mount Pelion is the first destination that comes to mind. The mountain has relatively low levels of wilderness and elevation. Its highest summit, Stavros, is 1.624 metres, stretching for approximately 50 Km. Mount Pelion forms a natural borderline between the district of Magnesia and the Aegean Sea.