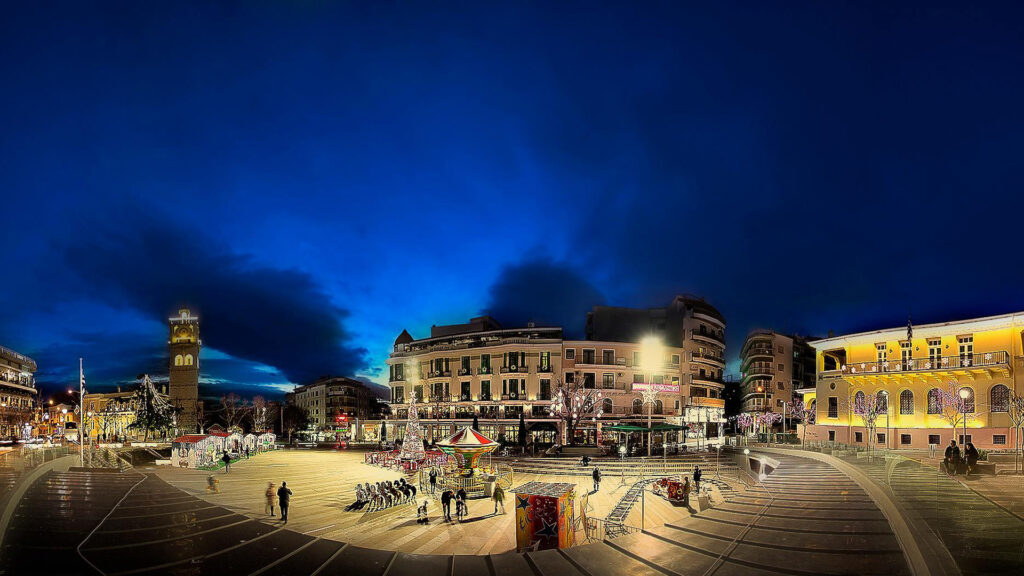 A mountain town with a centuries-old library, famous crocus fields and a miniature ‘Grand Canyon’. On this journey to northern Greece, Kozani will win your heart.

Life in the Macedonian town of Kozani unhurried and uncomplicated. Its library has been slowly growing for four centuries and now rivals the National Library in Athens for its rare and valuable works. Discovering its other charms is simply a matter of walking the classic promenade, visiting Servia and its miniature ‘Grand Canyon’ or walking over the bridge at Lake Polyfytou. This laid-back corner of northern Greece overflows with beauty. Try to go in October for the saffron harvest when the purple crocuses are in flower.

What to do in Kozani

The ancient city of Aiane was the most important of the kingdom of Elimeia. From the finds here, archaeologists have concluded that it was home to quite an advanced civilisation, on a par with the Mycenaeans. Start your tour at the acropolis at the top of the hill and carry on to the Necropolis, which was an important burial site from the Bronze Age to the Post-Helladic years. You can enjoy finds from the ancient city, the necropolis and the surrounding area in a modern museum a little outside Aiane.

Tracing the course of the town’s past prosperity, you will come across attractions, such as grand 18th-century houses as well as the home of Georgios Lassanis, a historian and hero of the Greek War of Independence. In Kozani’s historic centre around Nikis Square, you’ll find the post-Byzantine church of Agios Nikolaos with its attractive belfry and carved birdhouses, the traditional meeting point for the town’s inhabitants.

Historic documents in the library

The Kovadareios library is not just a collection of dusty pages, it is a compilation of the history, symbols and values of a brand new and simultaneously ancient nation. Among the valuable codices and rare volumes, you’ll see one of the two surviving copies of the ‘Carta’ (Charter) of Rigas Feraios, one of the founding fathers of modern Greece. After the National Library in Athens, this is the richest in Greece. It has been accumulating rare volumes and relics for four centuries and has one of the most comfortable reading rooms in the country.

The Byzantine emperor Herakleios built a town and a fortress here in the 7th century. By the 9th century, it had expanded to become the most important settlement in the region. Nowadays, a well-maintained path above Servia leads you to the ruins after taking you past the cascades at Houni with their rocks shaped like human figures. Nature meets history on the same hike.

One of the most spectacular sights in Kozani, the Servia Bridge is 1,372m long and the stories told about it are about as tall. Giant catfish are said to live beneath the bridge. Though a mountain town, Kozani has a notable Yacht Club with facilities under the bridge (which is also known as Polyfytos).

Did you know that Macedonia has its very own ‘Grand Canyon’? This impressive natural phenomenon took 70,000 years of erosion to become the attraction we marvel at today. You’ll find it in the Potamia Ravine by following the paved road to Mikrovaltos in Kamvouni.

Worth more than its weight in gold

Kozani is the saffron capital of Greece and since antiquity has been one of the major regions for its production in the world. Every October inhabitants of the surrounding villages take to the crocus fields for the painstaking job of plucking the three crimson stigmas from an ocean of the mauve flowers (Crocus sativus). Prized in the cuisines of Spain, Iran and Asia for its exquisite, distinctive aroma and colour, it may be the most expensive spice on the market. You know it from buns and paella, but it was also used to dye the robes of Buddhist monks. In some parts of Greece, people drink saffron tisanes to relieve headaches, improve circulation and refresh the brain.